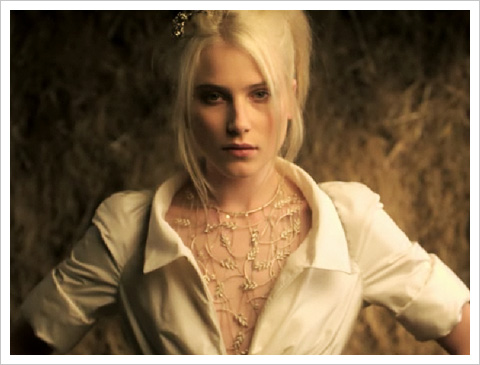 I love the countryside. It's Fragonard. I just did a shoot with Diane Kruger. She's country girl, too. We felt at home. It added to an idea I'd already been working on. I like the idea of extremely new materials with very traditional things like linen and burlap. Clogs, which we refer to as "Five O'Clogs" here...
At the same time, technology, with the phone bag. You're isolated in the countryside, so it's good to be able to communicate, to send photos of your public life to people in the big cities. In the '30s, Chanel made dresses with poppies and cornflowers. Some if I were to need some authority to justify this image, I could say that's it. Also, it's very pretty, so I used that idea. Her were different, but it's the principle. I have no principles, but I stick to that one.

Lilly Allen is quite a story. Since she became famous, she's been seen wearing Chanel, which bought herself, since we didn't know her yet. The London store said, "This young woman is buying Chanel like crazy." We thought, if she likes us, why not do something with her? We discovered a very amusing, very appealing, very funny person. We did this campaign. I photographed her. She's a lot of fun. She's talented. She was struck by the fact that she was across from Prince. She didn't know. When Prince is on stage, he's one of the best.