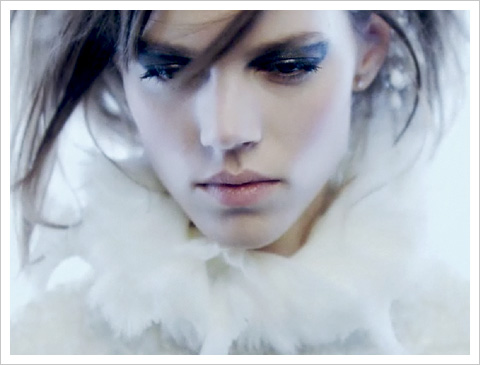 I'm fascinated to have brought an iceberg from Sweden. Even though it's in pieces, it's 30 tons, which came in I don't know how many trucks, and sculptors worked in that box almost a week. It's fascinating. It had never been done, and it won't be done again soon.

- Is everything real or fake?
Real fakes. All the fur is fake. But the designs are real, and I hope it's real fashion. But "fake fur " is a derogatory term. In that case, our tweeds are fake, because most Chanel tweed isn't woven but embroidered. There's a better term.

- For this fur.
Costume fur.

- Costume fur!
You say "costume jewelry" for fake jewels... "Costume fur" means it's imaginative. It's a fantasy. That's the term, not "fake fur", which is degrading.

- A great deal of attention to the jewelry...
Yes, I found the theme was a lovely pretext. Icicles are beautiful. Like rock crystal. I love those materials. Don't forget, I'm from the north. It's familiar to me.

- Those tweeds woven with fur made me think of rocks, of moss, of snow suddenly giving way, revealing a rock. There's so much work on fabrics.
Yes, but it seems natural and spontaneous to me. I'm glad you see it that way, but imagine if I said it to you.

- Boring. Redundant, didactic.
I make collections, period. I'm glad you see what I'd like you to, but I won't spell it out.

- Everything is short, except the last two dresses. Did you want to make it short, graphic, modern, mobile?
Yes. Length is no longer an issue. Have you heard journalists discuss sleeve lengths?

- No.
Me neither. After all, arms and legs... That's how it is. Nothing is new. It's not the New Look era, when length could be sensational. Today, you wan't short, you want long, you want mid-length. It's up to you to put it in a modern context, but not hope it will create a "fashion sensation". It won't change the world.

- It's about movement.
It's key in life.

- A crazy-cool collection?
The designer.

- Crazy-cool designer?
If you use your "crazy cool" positively, you can get good results.