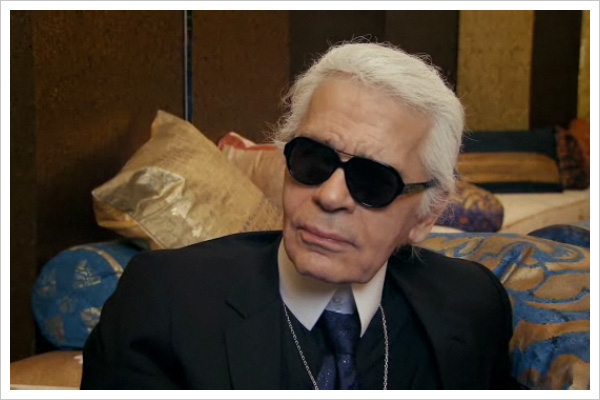 I did a book on Ravenna, on the few Byzantine vestiges which remain. It was printed Mr Steidl on parchment with gold leaf. I am very happy with the book. The city was heavily restored, so finding real vestiges is not easy. You must not forget. Theodora was there in the late 4th and early 5th century.

- You create a mischievous parallel between Coco Chanel and Theodora.

Exactly. She liked jewelry with a Byzantine touch, cabochons. We see them on the mosaics and everything. The mosaics are exquisite. But in photos, a good documentary photograph has no life. I think I found a way to photograph them which portrays the emotion of their reality. You will see I do not want to influence you.

- Is the idea of mosaics central to this collection?

Of course, in the embroidery. The buttons are square like Byzantine jewelry. Nothing really shines. Everything has a shimmer like mosaics. Mosaics were in lapis, pieces of glass with gold leaf underneath. It is incredible.

- It made me think of Istanbul, but also Marrakech.

It is a mixture of all that. The decor, the atmosphere. It is an extrapolation of the idea of something we never knew. Byzantium is unknown to us. There is little left. A few vestiges remain in the cellars of old houses in Istanbul, but it is not much to look at. The luxury of Byzantium has disappeared. There are few things in Ravenna, but not a lot. The city has somewhat collapsed. Only pieces of the floors remain. It was destroyed by time.

- I was marked by one outfit which looked like a crusader's tunic. Black and white with an asymmetrical panel.

That crusader's tunic was in fact men's apparel at the Byzantine court. They had a large side pocket like that. If you look inside the book, I made a reprint in parchment and gold of Theodora with her ladies in waiting and two court gentlemen. The clothes they are wearing have that pocket.

- There is a type of androgyny.

It is not a sexually aggressive fashion. Women were very important in Byzantium. They had a way of even dominating men. A man who was not handsome could not succeed.

Incredible. There are even university theses on Byzantium. The women led.

- Are you still amazed by the embroidery brought by Mr Lesage?

Fortunately! And the Monteix ateliers, Vermont, and everything. Luckily I love this profession more than ever, and I am also free to do books, photographs and everything. It is that everything which gives me inspiration which an isolated ivory tower could never provide.

- These collections are your way of supporting the metiers d'art?

It is simpler than that. This is not a humanitarian act. That is not it. Not one could take over these businesses. That is why Chanel bought them. I initiated this collection for a simple reason of balance. We have two Pret a Porter collections, one pre-fall and one spring, and the same thing for winter. There is the Cruise, but nothing to balance it. I wanted Chanel to have six collections a year, which allows us to renew the stores every two months. Only Chanel does that.

- You want to end the year on a blaze of glory.

I do not even think that. It creates balance for a House with a worldwide presence. Our customers want to return often. They do not want to see the same thing as three months ago. We are not a multi brand label. So we must multiply our own proposals.